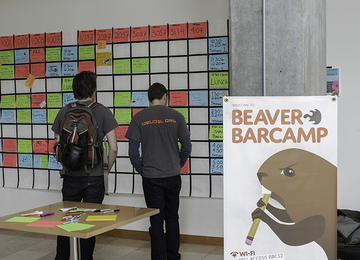 More than 160 students, community members and educators gathered in the Kelley Engineering Center at Oregon State to share ideas, make connections and learn together at the Open Source Lab’s Beaver BarCamp 12 on Saturday, October 12. An informal conference hosted twice each year by the Open Source Lab, Beaver BarCamp encourages attendees to participate by both presenting sessions and participating in discussions. Throughout the day, 50 sessions were presented, with topics ranging from Python programming to starting a business to creating a universe.

At Beaver BarCamp, sessions are scheduled the morning of the event: everyone writes the session they are interested in presenting on a Post-It note. Interest in sessions is gauged by having participants place dot stickers on their favorite sessions. Next, OSL staff arrange the schedule according to the needs of the presenters and popularity of sessions. Wendy Kincade, a master’s student at the University of Oregon, has attended Beaver BarCamp since it began in 2008 and enjoys the freedom this aspect of BarCamp provides.

“I love the idea of showing up and talking to people about stuff that I don’t know we’re going to talk about,” says Kincade. “The spontaneity of it is appealing to me.”

In this way, Beaver BarCamp creates a unique setting for students and community members to meet new people and share their interests, hobbies and research. Ken Olsen, a software technician at Hewlett-Packard, enjoys coming to Beaver BarCamp for that reason.

“If I had to explain BarCamp to someone who hasn't been, I would say it is a unique opportunity to share information and skills, and make connections with others who have similar interests,” Olsen says.

Olsen was able to make long-lasting connections during the Beaver BarCamp, because the cooperative atmosphere allowed attendees to participate in the instruction. Olsen presented a session about microcomputers, such as Raspberry Pi and Arduino. When a participant needed help while Olsen was busy, someone with programming experience stepped in.

“I found not only a great student, but also a great mentor who I invited to come assist me (at future workshops) as well,” says Olsen.

Students from five different Oregon campuses attended Beaver BarCamp on Saturday, enabling more collaboration and networking between Oregon universities. Students and educators from across Oregon’s university system welcomed the opportunity to socialize and learn with each other.

“This is the second time I’ve come,” says Donovan Finch, a Portland State University student majoring in computer science. “It’s a great chance to meet people from the tech community, especially from other universities.”

Students can also benefit from Beaver BarCamp by taking advantage of the opportunity to practice their speaking skills in a more relaxed atmosphere. PowerPoint karaoke, a popular session held at the end of the day, is a game where random PowerPoint slides are taken from the internet and a volunteer gives the presentation — without knowing what they will present. The volunteer has to make it up as they go along, allowing students and professionals to practice impromptu speaking. Russ Earl, a software engineer with Intel, attended Beaver BarCamp for the first time and participated in PowerPoint karaoke.

“I'd heard about PowerPoint karaoke but didn't quite know what to expect,” says Earl. “It was a fun time and a good chance to practice speaking skills.”