Building a Bright Future With DevOps 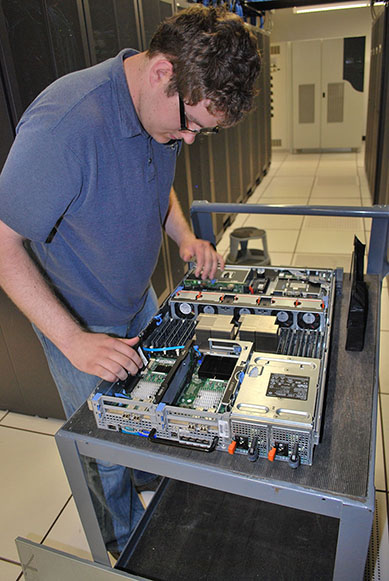 Sometimes finding the best solution means starting over. That was Mike Cooper's dilemma as he tackled his first solo project at the Oregon State University Open Source Lab. An OSU sophomore studying computer science who had just been hired in March 2010 to work as a system administrator for the lab, he was tasked with securing a network connection that could be extended to laptops, allowing lab staff and hosted projects to connect to the lab's private network from anywhere. Cooper decided to scrap the previous method that others had planned to use to link the network servers and instead opted for a virtual private network, a transient link between servers that he felt was a better fit for the lab's needs.

“When I started the project it was kind of hard for me to look at this and say ‘No, we should be doing something else’ and throw away all that work,” Cooper says.“But I decided that the approach they were taking wouldn't work very well for what we wanted.”

Cooper felt sure that his proposed solution would be well suited to the lab’s needs. There was only one problem: He didn't have detailed enough knowledge of how the computers handle networking to complete the necessary steps to ensure the VPN was as effective and convenient as possible.

“This was the first time I was working on something that people were going to use,” Cooper says. “If it was down to the point where I needed to learn this fairly complicated thing that usually you don't have to know for a project of my own, I probably would have gotten bored and wandered off to another project.”

Over the next two years, Cooper continued to extend his professional knowledge as an OSL system administrator. He worked on servers, helped manage projects and communicated with representatives of hosted projects to resolve questions. As he gained experience with the lab, he also took on a mentoring role toward newer students, who he helped acclimate to the lab.

“I've always been in a position where I like to teach people about technology, but doing it in a professional capacity definitely helped me grow,” Cooper says.

For Cooper, collaborating with his peers and with professional staff members in the OSL was just as valuable as interacting with users and external project managers. “Being surrounded by experts,” he says, was both motivational and educational.

“The contacts I made through the OSL really helped my education,” Cooper says. "The pace was much quicker than in classes because the pace is you learn as quickly as you can; not for the midterm next week. You don't wait to learn.”

And that proactive perspective quickly helped Cooper find success outside of the lab as well. During the summer following his junior year, he landed an internship with ITA Software, a company that had just been acquired by Google. At ITA Software, Cooper worked in a development position, allowing him to round out the experience in system administration that he’d gained at the OSL.

As he neared graduation this year, Cooper found his professional skills were so comprehensive that he was able to not only successfully interview for a job with Mozilla, but was offered a position as a Web developer, even though the bulk of his experience was in system administration.

Switching to development in his career was another instance when Cooper recognized that his best option was to take a new approach.

“I enjoy system administration, but I enjoy development more,” he says.

For Cooper, finding work immediately after graduation in the field he is passionate about is a rewarding result of his experience at the OSL and the work he’s done over the last two years. The unique environment of the lab, he says, helps students find uncommon success.

“It's probably been one of the best experiences that I've had so far, and it's probably the single most beneficial thing I've done as far as my career and my personal learning,” Cooper says. “Being in contact with a real environment and having permission to work autonomously is something that students don't usually get. We have a particular level of responsibility and a particular level of trust and that helps us grow.”

To support the OSL and the student employees who help the lab provide top-quality hosting and development services, visit our Donate page.