Emily on Essentials: Robotics, Open Source and Life as New Student at the OSL

Ed. Note: As part of our ongoing series of interviews with the OSL's student employees, this week we're bringing you the story of Emily Dunham, one the newest additions to the OSL. Emily joined us just over a month ago as a student developer. Emily was kind enough to share her thoughts with the Lab's student writer, Anthony Casson. 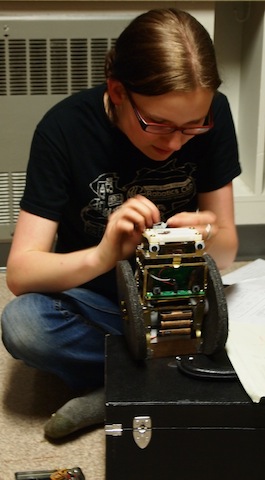 Emily hard at work on her latest creation, which fetched the Artistic Design award at this year's Oregon State University Engineering Expo

What year are you at Oregon State University?

I’m a freshman in computer science in the Honors College.

How was the transition from high school to college in Computer Science?

The independence has been a whole lot of fun. But college has really exceeded my expectations. The classes, especially the Honors classes, are really good; the teachers really care about the students’ personal development, learning, and involvement. And I’ve had some awesome teaching assistants in my labs.

You’ve been going to Beaver BarCamps since you were a high school student in Corvallis’ neighbor, Philomath. What keeps you coming back?

BarCamp is fascinating just for the totally different paradigm of it. I had an opportunity to attend a normal conference as part of the Intel Learning Company, the freshman open source group that I’m involved with. After having done that, I started appreciating how unique BarCamp really is.

How did you get a spot on the OSL team?

I attended one of their sessions about being a systems administrator, and then spoke with the people who made that presentation afterwards about what I’m interested in and how it’s similar to a student job I held in high school. They invited me to apply, and so I applied; I interviewed. They told me I had gotten the job by the end of the week, and I started the next Monday.

For a long time, I didn’t really know what the OSL was—didn’t know it was here— but I started hearing about it in various newsletters that go out to students, and at BarCamp. I started looking around. Almost every time I installed an application in Ubuntu I thought, ‘Okay, that comes from OSU OSL; that’s what that place is.’ I started paying attention to the neat things it does, the ways it’s involved, and then realized it seemed like a really cool place. After meeting the people here—they’re just really great people to work with because they absolutely love learning, and that’s why they’re in it. 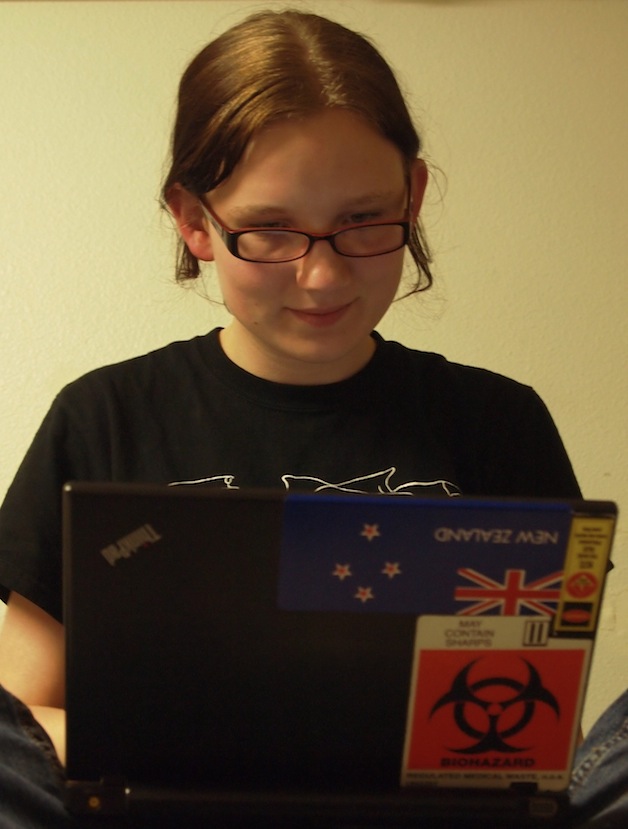 How has working in your new position been so far?

On the Friday before I started work, I was talking to Rob McGuire-Dale and he said, ‘It’s a great job. It’s a really great job. It’s the best student job on campus, but be warned: the first week is just a fire hose of information.’ Everybody, though, really seems to enjoy teaching; I never feel like a question is stupid, and people are always helpful about where I can go to learn things— how I should approach them—they’re always happy to answer my questions. I’ve been learning really fast; I’ve been thrown into the middle of this Ganeti Web Manager framework, which is a mix of several languages I hadn’t worked with very extensively in the past. So it’s just been fascinating untangling it all.

What are some skills you bring to the OSL?

I personally feel like one of my unique skills is the ability to communicate—to translate ‘geek’ into English, almost—to write documentation for non-experts.

What are you hoping to get from your time at the OSL?

First off, during school, my classes make me realize, ‘Oh, it would be so cool to do something like that. It would be so cool to learn that language. It would be so cool to work on a programming project.’ But I never really take the time to do that. So on a personal level, the OSL is forcing me to take the time to learn new languages, learn the intricacies of how a certain computer, a certain software system works. And on the professional level, I could graduate here with three years of professional software development experience, and that is just a phenomenal opportunity.

Has anyone in particular helped you along during the first few weeks?

One person who has almost always been in the office when I am is Corbin Simpson, and he really enjoys teaching. He made a point that I understand the basics and how Python works. He really went out of his way to figure out what I know so far and point out specifics of what someone of my exact knowledge will need to be aware of about the new languages. He’s been extremely helpful.

Does the OSL push you to develop your abilities, and does it help you learn new ones?

Many thanks to Emily and Anthony for this interview!