A Look Back at Beaver BarCamp 1 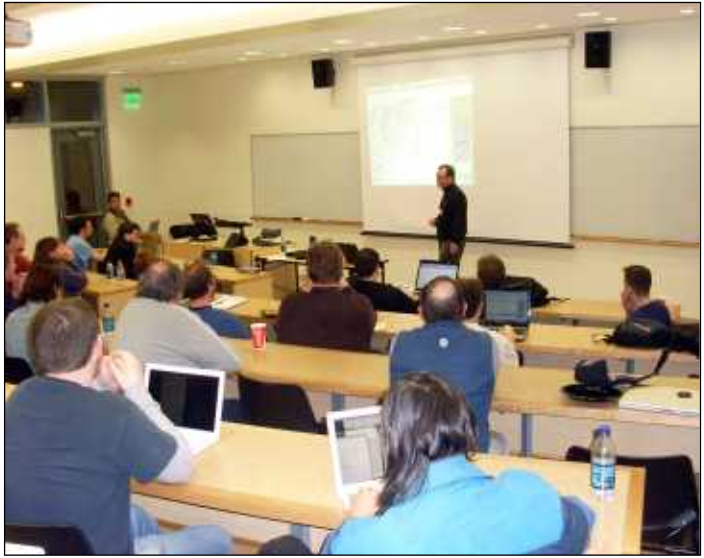 After attending BarCamp Portland, Alex Polvi was inspired to create a similar opportunity for Corvallis. At the time, Polvi was a computer science student at Oregon State University, and he approached Associate Professor Timothy Budd about creating a BarCamp on campus. After driving up to Portland with some students in order to see a how a BarCamp is organized, Budd began creating the first Beaver BarCamp, with the help of his students and Corvallis community members from the Software Association of Oregon. The first Beaver BarCamp was held on March 1, 2008.

Timing is everything, and it just so happened that Budd had recently received a grant from IBM to promote open source technology. With those funds, the group was able to pay for food, t-shirts, and the rental fee for the Kelley Engineering Center, all essential elements of holding a BarCamp.

“It was nice to not have to worry about fundraising as we were figuring everything else out,” Budd says.

Budd viewed the BarCamp “unconference” format as a unique way to forge ties with the local open source community. Although one of Budd’s challenges was doing publicity on a small budget, the first Beaver BarCamp attracted over 100 participants, including a mix of students and local technical community members.

“I was surprised at the first camp that we actually had more nonstudents than students,” Budd says. “Although, a lot of students tended to show up once the free food was placed out.”

At this first event, session topics focused on the technical: Intro to Linq and Mud Hut Programming, for example. In the evening, the format shifted from hour-long discussions to an “Ignite” format, where each presenter is allowed 15 slides with 15 seconds per slide for each presenter.

The success of Beaver BarCamp led OSL Director Lance Albertson to step into the role of organizer when the program needed new leadership, bringing Beaver BarCamp under the OSL’s umbrella. A part of the OSL’s outreach efforts, Beaver BarCamp provides a way for the University and the local technology community to collaborate and share ideas.

“The students really enjoy it, it’s a great way to recruit new students (to the OSL) and to show the community what we’re doing,” Albertson says.

Although Polvi and Budd are long gone from Oregon State’s campus, Beaver BarCamp continues to thrive as a part of their legacy. The program has expanded to include non-technical session topics and continues to draw members of the local community to campus.

“It gives the opportunity for anyone to get public speaking skills and gives us a platform to share what we do,” Albertson says. “It’s an open house of sorts.”

Beaver BarCamp 12 is scheduled for October 12, 2013. Follow us @beaverbarcamp to stay informed of upcoming events.