If you've been following the news, you've likely heard of the Open Compute Project, Facebook's project to build the most efficient data center at the lowest possible cost and to share their knowledge with other companies. Last Friday, Facebook opened the doors of their Prineville, Oregon data center, inviting a host of dignitaries and members of the press to tour this newly opened facility and learn more about the Open Compute Project. The Open Source Lab crew was fortunate enough to be invited to join this august group for a tour thanks to David Recordon, Facebook's Senior Open Programs Manager. 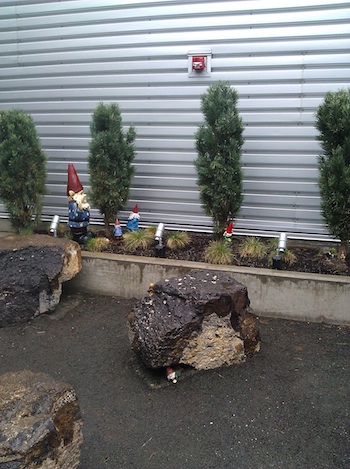 We kicked off the day with opening ceremonies, including introductions by several of Facebook's senior staff, members of the Oregon Legislature and the Mayor of Prineville, Betty Ropple. Finishing off the morning's event, Mayor Ropple and Facebook's staff pushed a gigantic "Like" button on the opening of the data center.

There's so much "Like" going on in this photo that you can't even see the button through the glow.

We had a bit of down time before our actual tour began, so we chilled out in the facility's game room and enjoyed playing Xbox together. 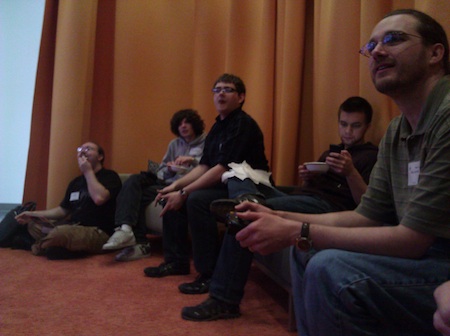 A little Halo, anyone?

And since we wanted to be great guests, our students also fixed one of the displays that was offline when we arrived.

How many sys admins does it take to fix a display? At least four.

Among the many amazing things we saw on the tour, we were treated to the first design spec ever created for the data center.

Preliminary electrical specification for the Prineville facility, created late one night on a napkin.

Following the tour, we were treated to an evening of dinner and music in an enormous party tent. It was particularly exciting to meet so many members of the Prineville community and hear what a positive impact the data center's creation has had on the local economy. Sadly, we missed seeing Mark Zuckerberg due to a long drive back to the office, but the rest of the day more than made up for it.

You can read more about the facility on Lance Albertson's blog, or check out Greg Lund-Chaix's post on our visit. For more photos, check out Leslie Hawthorn and Lance Albertson's albums on Flickr. Many thanks once again to David and Facebook for having us!

The OSL is pleased to host OpenCompute.org.