Students at the Oregon State University Open Source Lab (OSL) get into a project development groove, especially during the summer months. They’re happy to exit the groove, though, when major open source events roll into the region. 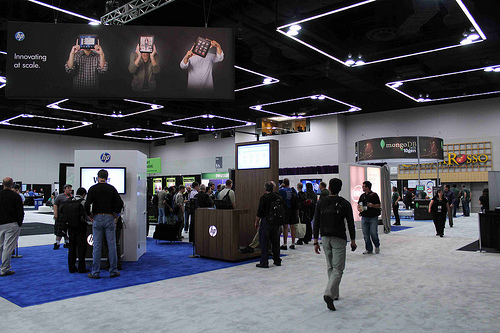 A group of them took a break from their daily routines and traveled to the Oregon Convention Center in Portland last week for OSCON, now in its 13th year. Amidst dozens of booths, each with its own ornamentation -- simple and extravagant -- they wandered, hunting for stickers, branded flashlights and other free promotional garb, when they weren’t tending to the OSL’s own booth.

Thousands of attendees flocked to the many sessions and tutorials. The OSUOSL’s Lead Systems Administrator and Infrastructure Architect Lance Albertson alongside Lead Software Engineer Peter Krenesky led one of each. The first was a tutorial, Hands on Virtualization with Ganeti, and Wednesday’s session was Ganeti Web Manager: Cluster Management Made Simple.

Meanwhile, the students jumped from booth to booth with the masses to learn about new projects, startups and open source initiatives within large companies like Facebook, Google and Intel. The Lab’s OSCON newcomers like freshmen Emily Dunham and Alan Sherman were surprised by the varied relationships between attendees and the open source community. 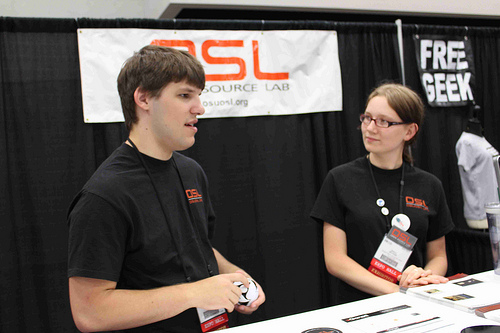 “I found it a bit interesting to get an idea of what the end users are like,” Dunham said. “It was a much more corporate image than what I previously associated with open source, but it’s a good reminder that it really is for everyone.” 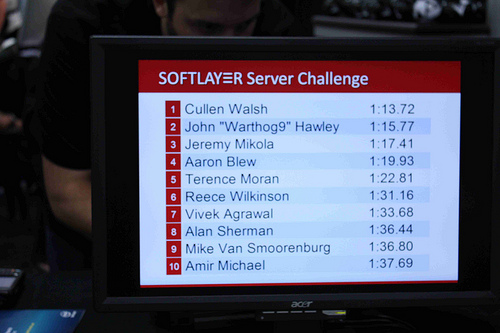 Both Dunham and OSUOSL Outreach Manager Leslie Hawthorn attended a special part of the Google-sponsored lunch on Wednesday. It recognized women in the open source community.

“I got to meet some really cool people there,” Dunham said. “It’s always kind of nice to know that being in a minority doesn’t mean you’re the only one.”

For Corbin Simpson, one of the OSL’s veteran students and OSCON returner, the best part of the convention was the individual “birds of feather” sessions, held after hours.

“They provide good opportunity for community members to actually discuss things without the format of the expo hall or the tutorials,” he said. “It’s really cool that they provided that space and that time for that.” 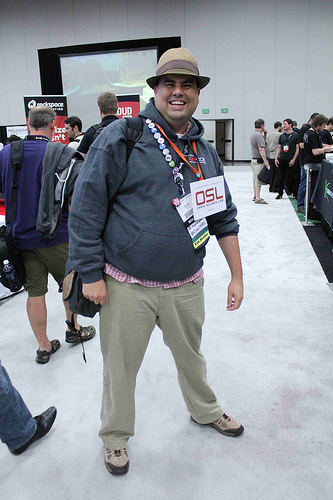 When they weren’t migrating to different spots, the students helped operate the OSL booth, complete with Ganeti Web Manager for users to demo.

Candid as students often are, they admitted their Lab pitch to passersby became rather familiar. They appreciated the repetition, which in turn improved their knowledge of the Lab itself.

“Figuring out what aspects of the OSL people are interested, and seeing just how many people had heard of it before gives me a lot better perspective of our place in the community,” Dunham said. “There are aspects of it that are kind of surprising. It’s surprising how many people haven’t heard of us, but then again it was really nice to see how many of the booths had a little OSL sign on their table saying, ‘We’re hosted here.’”

The OSL’s impact on the community -- the global OSCON community -- was obvious. Students and professionals working together, in addition to supplying world-class services for projects of varying popularity levels and directions, the Lab held its own amongst large-scale corporations.

“I think what the OSL does is remarkably important and is possibly the most important thing done at OSCON,” Simpson said. 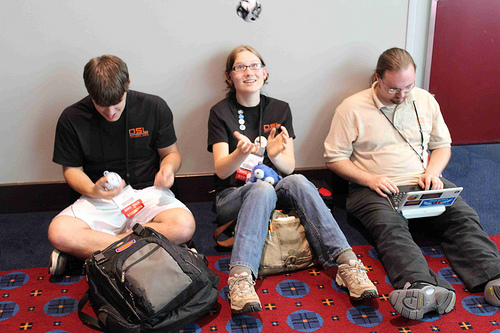 Ed. Note: This story was written by Anthony Casson, Student Writer for the OSL. You can see more awesome photos of the OSL in action at OSCON in Anthony's OSCON Flickr Pool. You can also check out more photos from OSCON from our Public Sector Communities Manager, Deb Bryant on Flickr.