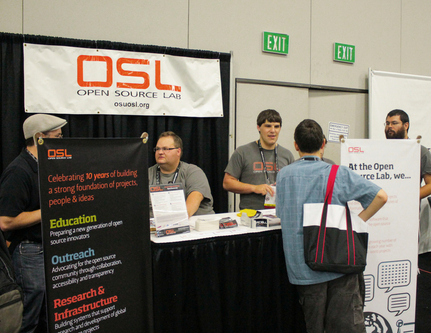 The Open Source Lab (OSL) recently kicked off its 10 year celebration at the O’Reilly Open Source Conference in Portland July 23 - 26.

Over the last decade, the OSL has contributed much to the recent growth of the open source community and is using this milestone to reflect on its past accomplishments and to create goals for the future. By focusing to ‘Build The Future’ in three key areas: education, outreach, and research and infrastructure, the lab will strengthen its position as an open source leader.

“It’s an important milestone," says OSL Director Lance Albertson. "We’re not just a small group of people anymore but a maturing organization with a smart staff of both students and non-students."

Icons used to represent the three key areas of the Build The Future initiative: education, outreach and research & infrastructure.

“It's exciting to see everybody having positive feedback for us moving into EECS," Albertson says. "Becoming part of the EECS department will enable us to reach out to more students interested in FOSS (free open source software) or the OSL than we normally do. Sky’s the limit on what we are capable of doing with this migration.”

One of the many ways the OSL promotes open source education is by attending conferences, and as one of the largest open source conferences, OSCON provides many avenues to do so with over 3,900 attendees and 100-plus company booths. At the conference, the OSL hosted a booth in the nonprofit pavillion, and students and staff enjoyed interacting with members of the open source community.

“OSCON was awesome," OSL Student Developer Geoff Corey says. "It was fun working the booth and telling people from different backgrounds what exactly we do at the OSL”. 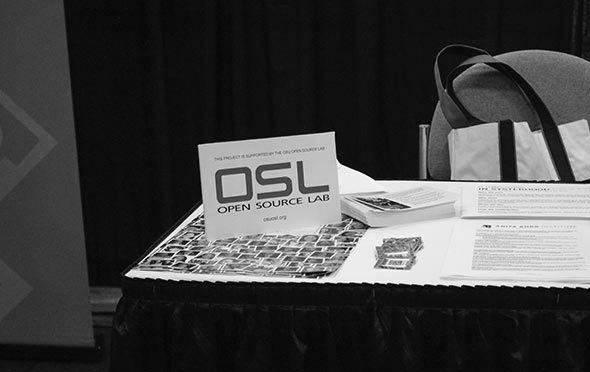 "Hosted by the OSL" signs for the OSL's hosted communities.

The OSL handed out placards to the many open source projects hosted by the lab that also had booths in the OSCON expo hall, visually demonstrating the impact the lab has on the open source community. In addition, several community members stopped by to meet the students and staff that support their projects, facilitate their downloads, or provide technical help.

Corey thought “it was pretty cool how many big companies knew about us and our many services we provide to people showed how big our impact really is in the open source community”.

On Tuesday night of the conference, the lab hosted an alumni party in appreciation of the students and staff that have contributed to the lab’s success with 50 guests showing up. Celebrating the OSL’s 10 year celebration, the OSL provided food along with a slideshow displaying the history of the lab and Squishymedia generously donated the use of their office space in downtown Portland to help in the party efforts. The atmosphere felt like a family reunion, as old friends reconnected and new employees were welcomed. 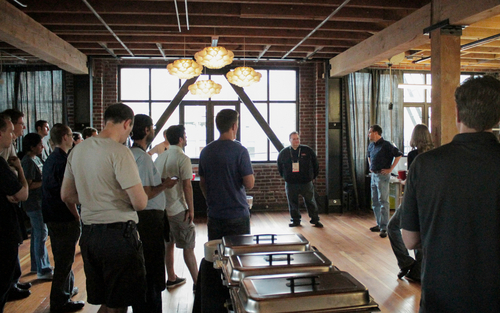 OSL Director, Lance Albertson, and past OSL Project Manager, Greg Lund-Chaix, speak about the history of the OSL at the alumni party hosted at Squishymedia.

“Once you are a part of the OSL, you are always a part of it,” says Greg Lund-Chaix, Squishymedia tech lead and former OSL project manager. “I still use ‘we’ when I refer to the lab.”

According to Albertson, the slideshow made him think about what it took to create the OSL.

"The OSL became what it is because we had the right connections, opportunities, people, and sponsors at the right time," Albertson says.