OSL in the Spotlight at Summer Conferences 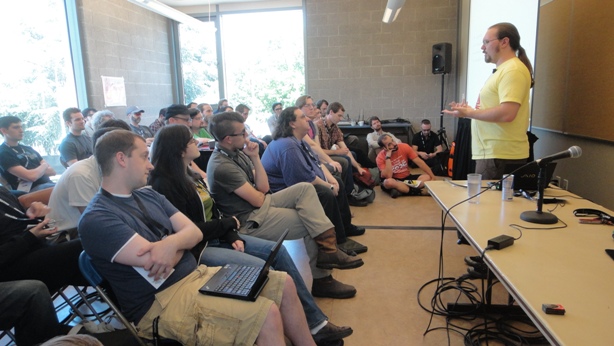 The open source community is driven by the people who use, change and support open source software. This summer, members of the Open Source Lab staff enjoyed opportunities to connect with those people face-to-face at annual open source events. Lab staff and students attended the Portland conferences Open Source Bridge and O’Reilly Open Source Convention, where they presented talks, hosted a booth to represent the OSL and talked shop with everyone from recreational users to industry developers.

“Conferences are a way to interface with our community; not only our users, but people who know of us and like what we do, we can hear from them things that they want,” says OSL Associate Director of Operations Lance Albertson. “It's just great to be able to interact with people.”

To kick off the summer, Albertson and other staff members attended Open Source Bridge, a volunteer-supported conference held June 26-29 at the Eliot Center in downtown Portland. Hundreds of community members, corporate representatives and people thinking about and contributing to open source gathered to share ideas and discuss technology. The annual conference focuses on the theme of open source citizenship, bringing individuals from a number of sectors, programming languages and backgrounds together to collaborate on what they all have in common: open source.

At Open Source Bridge, Albertson presented a talk on private cloud platforms, Project Manager Greg Lund-Chaix spoke about open source technologies in K-12 education and student developer Corbin Simpson presented to a crowded room of more than 50 people on translating lessons from esoteric programming languages into methods for improving common code bases. Lund-Chaix then teamed up with Senior System Administrator Rudy Grigar and Senior Software Engineer Ken Lett to deliver a multifaceted presentation on DevOps. The three spoke from different perspectives in open source development, management and hosting to communicate a unified message about how collaborative thinking between developers and operations managers can improve project success.

“Developers and system operations people need to understand both sides to perform their jobs more effectively and collaborate for better end results,” Grigar said during the talk.

Kenn Wilson, a contract developer based in Portland, said after attending the OSL’s DevOps talk that the concept of integrating systems and development work wasn’t new to him, but that Lund-Chaix, Grigar and Lett brought new ideas to his attention.

Talks presented by the OSL and others at Open Source Bridge, Wilson says, are significant contributions to communal and individual knowledge.

“You can learn about things you weren’t aware of,” Wilson says. “It helps everybody here in a very tangible way.” 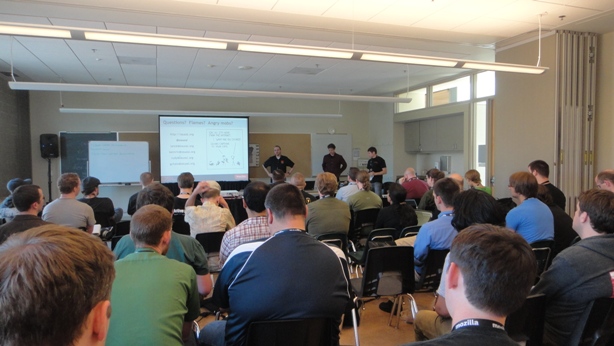 That commitment to supporting the open source community won Albertson the conference’s highest honor at its official party June 27. Albertson was presented with the Truly Outstanding Open Source Citizen award for his efforts to introduce students to open source technology and the OSL’s continued support of numerous open source projects.

“I think it's awesome,” Albertson says of his award. “I was completely caught off guard but I think it's a great honor to be able to have that award.”

Albertson says he is passionate about bringing students into the lab and exposing them to open source technology because he appreciates how strong of a resource the OSL can be for students.

“When I went through school I wished I had an OSL, and now I get to provide the resource I so wished I had to all these amazing students,” Albertson says. “It’s a great feeling.”

Former OSL student employee Brandon Phillips, who attended Open Source Bridge and delivered two of his own presentations, says Albertson was an apt choice for the Truly Outstanding Open Source Citizen award given his integral role within the lab.

“Lance has been a solid and steady hand inside of the OSL for years now, and it is an important role given the huge scope of projects that the OSL helps keep up and on the Internet,” Phillips says. “It is a well-deserved award.”

After wrapping up Open Source Bridge, OSL staff had only a few short weeks to prepare for OSCON. Hosted by O’Reilly Media at the Oregon Convention Center June 16-20, OSCON continued the conversation about open source software that began at Open Source Bridge, but -- with more than 3,000 attendees -- on a much larger scale.

The OSL was among nearly 100 exhibitors at the conference expo, which featured top open source industry partners as well as many open source projects hosted by the OSL. Students and full-time staff interacted with visitors to the OSL’s booth throughout the conference, sharing information about the lab’s current projects, explaining the OSL’s innovative integration of student employees and enjoying the opportunity to connect with other open source enthusiasts. 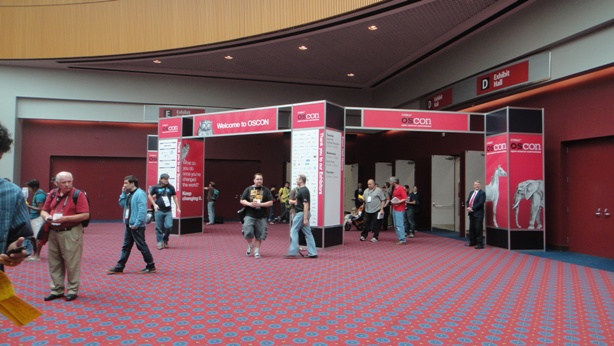 “It was good to interact with the corporate world and meet people professionally,” says Dean Johnson, a sophomore who began working at the lab in June. “People were really grateful for our mirrors and what we do, and it was nice to feel like what I’m doing here is making a difference and helping the community.”

Many stopped by the OSL booth simply to meet the students and staff members who have helped support their projects, facilitated their downloads or provided technical support in person. Todd Richmond, who works in information technology with Lincoln County, Ore., already knew about the OSL’s services, but visited the booth to say thank you.

“I use the OSL’s FTP mirrors daily,” Richmond says. “I think it’s a tremendous service, not just for other universities and governments, but for everyone. Having a regional site like that where we can grab security updates and things like that is fantastic.” 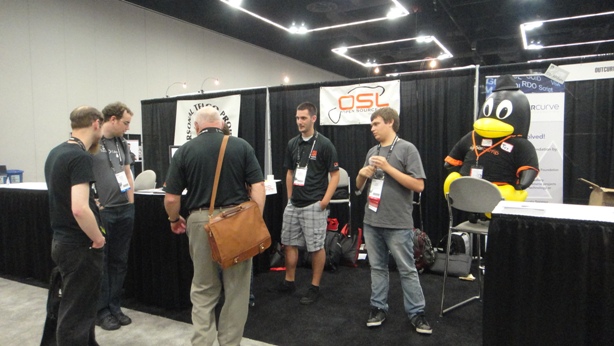 While at OSCON, Albertson delivered a talk on private cloud computing, and all of the OSL members in attendance hosted a Birds of a Feather session to introduce interested conference attendees to the lab and to offer those who already follow the lab insight on how OSL infrastructure continues to develop and improve.

As part of OSCON week, the lab also held its first alumni gathering in appreciation of the students and staff who helped the OSL become the resource that it is today. More than 40 of the people who have been part of the OSL story gathered to reconnect with old friends, celebrate the lab’s achievements and honor the first director of the OSL, Shay Dakan, who passed away just over a week before the conference began.

At the alumni event, OSL Director Curt Pederson, who has been part of the lab’s work since its beginnings, offered his thoughts on the group of people who have fueled the OSL’s progress over the years and his hopes for the future. Pederson emphasized the lab’s pristine track record for turning out students who go on to great success in the technical industry, as evinced by the caliber of people, many of whom represented top companies including Google, Rackspace and Mozilla, who were in the room.

“The alumni event reminded me of why we started the OSL nine years ago, and that the true value of our work comes from providing our students with real industry experience,” Pederson says. “Having 55 of our former students now in key roles across the open source community confirms that the most important thing we do for the community is mentor the next generation of open source leaders.”

To learn more about the OSL mission and find out how to support the lab's efforts, visit our About and Donate pages.