Real-world work experience is one of the most valuable things an employer can provide to students preparing to enter the job market.

At the Oregon State University Open Source Lab, that experience is readily available to 19 part-time student employees who balance their coursework at Oregon State with a job that offers them professional training. But the lab’s influence on ambitious students reaches beyond Oregon State, and even the United States, through Google’s Summer of Code program.

The summer program connects students 18 years and older around the world with mentors in the open source field and sponsors their work for the summer. As a GSoC mentoring organization since 2006, the OSL has had students from countries around the world, including China, Portugal and Venezuela, contribute to in-house development projects. Last summer, 19-year-old Polish student Piotr Banaszkiewicz collaborated with developers and students at the lab to refine tools for Ganeti Web Manager, a virtual server management program developed at the OSL.

“This is definitely the greatest and most valuable experience I could get,” he says. “Not everyone is fortunate enough to get it at this age.”

Banaszkiewicz implemented a daemon to provide metrics in Ganeti that can be displayed as a graph of data about the virtual machines the program is running. According to OSL Senior Software Engineer Ken Lett, who supervised Banaszkiewicz’s work, this addition to Ganeti will contribute both to the software’s usability and to future development.

“This allows system administrators to view the state and history of the machines in their cluster in a very visual and intuitive way,” Lett says. “His work also created an infrastructure on which further visualization and analysis tools can be built. Writing flexible, extensible and pluggable code not only makes our work easier in Ganeti Web Manager, but will hopefully inform and improve his future work in any type of programming.” 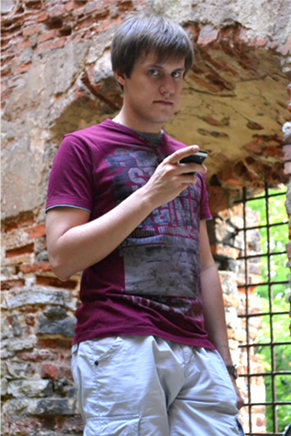 Working with developers more than 5,500 miles away from his hometown near Cracow, Poland, Banaszkiewicz says, was only difficult because of the nine-hour time difference that meant staff members didn’t arrive for work at the OSL office until it was evening in Poland. But by connecting with OSL staff over Internet Relay Chat and sharing ideas through Google Docs, he says was able to learn from his mentors at the OSL and improve his knowledge about virtualization and working with Python and Vagrant.

“I can see the OSL as a very pro-student organization, which I was delighted to work for,” he says. “There are some very passionate programmers, who actually were like teachers for me during GSoC.”

Banaszkiewicz is unique among GSoC students the OSL has mentored in that he previously worked with the lab through Google Code-in, a program similar to GSoC but designed for high school students. He has been the only Google Code-in student to continue to be mentored by the OSL in GSoC. Performing tasks for the OSL as a high school student, Banaszkiewicz says, introduced him to the tools used in professional open source development.

“I was a little younger and did not know many technologies used by the OSL team,” he says. “Now these technologies are obligatory in any project, and I'm very happy I could learn them so early.”

Now, Banaszkiewicz is studying at the AGH University of Science in Cracow. He plans to apply to work as a GSoC student with the OSL again this summer and continue to expand his knowledge of open source development. The OSL’s continued participation in GSoC, Lett says, not only offers students a unique opportunity, but also presents a host of benefits both for the lab and the open source community.

“Mentoring young open source developers bolsters the community we rely on, and helps make sure the new generation of open source developers comes in with real skill and knowledge,” Lett says. “It also creates connections that bring benefits back to us in the form of contributions to our projects, collaborations with other projects and relationships with developers around the world.”