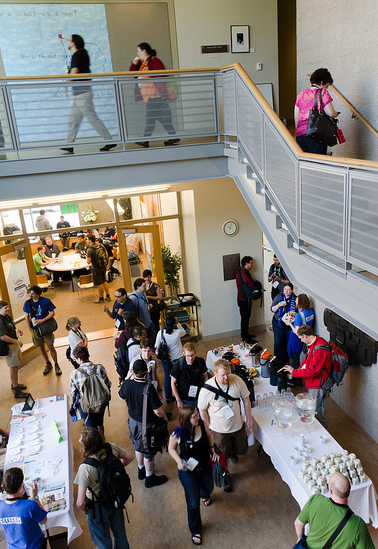 The annual four-day conference is a public platform for open source developers to discuss various technologies and projects. Hundreds of people filed in each day to listen to the individual talks and share information with the open source community.

Harder's presentation, Lessons from and for the Open Hardware Movement, attracted two dozen attendees. The talk included an overview of OSWALD (Oregon State Wireless Active Learning Device) and observations from its time as an educational tool for students.

The OSL developed OSWALD to help give Computer Science students at OSU hands-on experience in class. Freshmen students were given the device to modify; it was inexpensive, had the latest in technology from the mobile space, and was completely open for development. The project met some problems, including ones spurred by varied classroom experiences, support requirements, and students with different experience levels.

OSWALD is suspended for now, until funds are collected and a new platform is discovered. But it’s an important learning tool for students, which is why the OSL has analyzed the problems in order to make the next device better suited for the college environment.

"I think it's good to continue pushing for an open platform or something that students can do that’s actually related to real-world applications," Harder said.

Harder, who handled much of the software development, says he hopes companies look at this type of project and want to help - mostly through supplying components - because it gets students familiarized with the same types of technology they would work with in the professional environment. OSWALD and future devices like it are advantageous not just for students, but for companies where those same students might work after graduation.

On the second day of OS Bridge, Albertson and Krenesky gave their presentation, Hands-on Virtualization with Ganeti (Slides - PDF). Ganeti, an open source virtualization management tool developed by Google, is the launching point for Ganeti Web Manager (GWM), a web application that allows administrators and clients to access their Ganeti clusters. 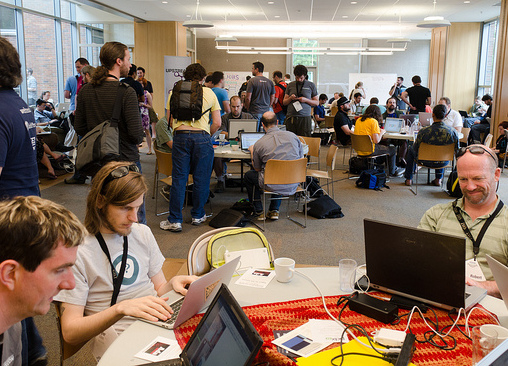 Many OSL members are part of GWM's development - both students and full-time staff. The tool is still in its early stages, but it's growing. Wednesday marked the second year Albertson gave a presentation at OS Bridge about Ganeti; last year, it was about what it is; this year, it was about how to install and use it, and what the OSL has added to the project, in this case GWM.

"(Ganeti) is active," Albertson said. "There are lots of new features. There are community contributions. There have been several large patches on the Ganeti proper project that we included."

The OSL is taking some simple approaches to promoting GWM, like attending conferences, blogging, and talking to people about it. In terms of its function, increased setup ease has helped its popularity.

"One of the big things that we've done is make it easier to get the project up and running, not just for end users but for developers," Krenesky said. "If it's going to take you hours to get it set up, you're going to turn people off long before they even open a source file, and you don't want that."

"Everything's preconfigured. You just download it and it does most of it for you."