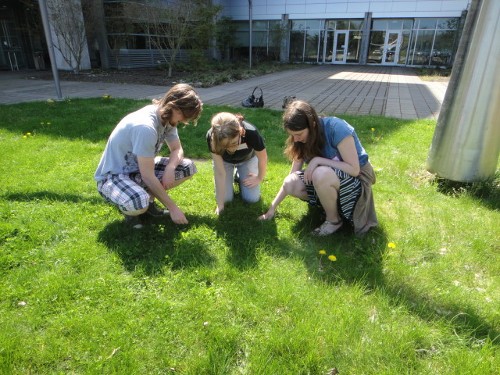 The Oregon State University Open Source Lab’s Beaver BarCamp 9 brought around 70 people to the Kelley Engineering Center on April 21 to discuss projects, explore new interests and share ideas. The sessions held throughout the day varied greatly in topic -- from robotics to hydroponic gardening to gaming -- but all shared an open forum and flexibility that promoted discussion and collaborative learning.

In Daniel Miller’s session, Indoor Hydroponic Gardening, he used diagrams and photos to demonstrate how he built a hydroponic gardening structure in his small room using materials purchased at a home improvement store. Nearly all of the 10 people who attended Miller’s session spoke at least once, asking for clarification about his methods, offering suggestions on how to improve the structure and even giving Miller ideas about what to make once the tomatoes he is cultivating are ripe. The most popular suggestions? Pizza and salsa.

“I started doing indoor hydroponics just a couple months ago,” says Miller, a junior in electrical engineering and computer science. “So some of the input I got was good, like the idea of buying pipes at an irrigation store. You give and you get information here.”

Attendees brought expertise in a variety of fields, culminating in immersive discussions both in and between sessions. When one member of a session group didn’t understand a concept, other attendees would assist the presenter in using a different frame of thinking to communicate ideas. 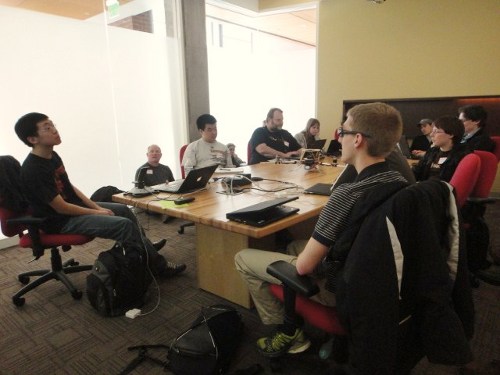 Soo Hyun-Yoo, a freshman in computer science, presented his two robot-operating-system-controlled robots in his session, explaining how the ROS software runs his robots and demonstrating their movement with a joystick tripod he built himself. Hyun-Yoo, who has worked on his robots for 18 months, says sharing a project with others can provide helpful insights to the presenter as well as the audience.

“It’s nice to have other people to bounce ideas off of, just a fresh set of eyes to find problems you don’t see yourself,” Hyun-Yoo says.

This collaborative spirit is much the inspiration for BarCamp and its spontaneous nature. Sessions at BarCamp can be presented by anyone on any topic, and were proposed throughout the day by attendees who wrote their topic on colorful cards and taped it onto the event schedule. Participants were invited to follow their interests and attend whichever sessions caught their attention. While computer science and programming remained the interests shared by most BarCamp attendees, the diverse sessions allowed people to apply that interest to a wide range of topics. 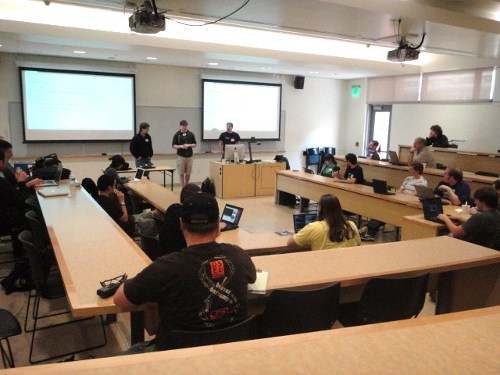 In one session, representatives from Portland State University took to a KEC classroom to discuss the PSU Computer Action Team’s use of Puppet automation software and detailed how others could effectively utilize Puppet in system administration. Simultaneously, a radically different session was taking place on the lawn outside the building: How to Find Four-Leaf Clovers.

Amanda Abbott, a junior in chemistry, led the session, in which she instructed her participants in how to recognize a four-leaf clover in a dense patch of clovers and grass. Abbott has been regularly finding four-leaf clovers since elementary school, she says, and quickly discovered several in the grass near the KEC front entrance.

“The best piece of advice is to find the thing that’s not a three-leaf clover,” Abbott says.

While searching for clovers, OSL Developer Emily Dunham reflected on how the process could be likened to the methods programmers use to teach machines to recognize objects. The strategy of finding the object that doesn’t belong, Dunham says, is similar to how one would program a computer to identify four-leaf clovers.

“I like the tools that computer science gives you for breaking things down and understanding the way a problem is solved,” Dunham says. “Because if you can explain something to a computer, you can explain it to anyone.”

The impromptu application of technical thinking to other subjects prevailed during breaks between sessions and during the BarCamp lunch hour. While enjoying refreshments, participants took advantage of the opportunity to talk about new technologies and best practices in everything from programming to education.

In addition to learning about each other’s interests, BarCamp participants also had the opportunity to attend a presentation from OSL Associate Director of Operations Lance Albertson about the lab’s projects and infrastructure. Following the presentation, which addressed what the OSL offers, how lab staff manage projects and why the lab utilizes particular organization schemes and materials over others, attendees were invited on a tour of the lab. According to Albertson, being able to bring interested community members into the lab and give people who may use software the OSL hosts the opportunity to see the physical location is part of what makes Beaver BarCamp a unique and valuable event for the lab.

“It's a way for us to directly interface with the local community,” Albertson says. “It also gives us a chance to meet other students that might potentially be interested in working with us and have face to face conversations with them.”

For most participants, the relaxed environment and diversity of topics at Beaver BarCamp are what make the event most enjoyable. Mark Overholser, who has attended BarCamp regularly since 2009, says he continues to come because the sessions are unpredictable but always worthwhile.

“You never know what is going to happen but you show up because there’s bound to be something interesting,” Overholser says. “People get together and talk, share ideas, and you learn things you may not have thought of before. You have to take it on faith that there is going to be something great.”

Beaver BarCamp is hosted semiannually by the OSL, which hosts some of the most well known open source projects in the world and facilitates more than 600,000 unique downloads daily around the world. The OSL presents Beaver BarCamp to promote idea sharing, collaboration and open source innovation, and will return with Beaver BarCamp 10 this fall.

To support the OSL's world-class hosting and development services, as well as events like Beaver BarCamp, visit our Donate page.