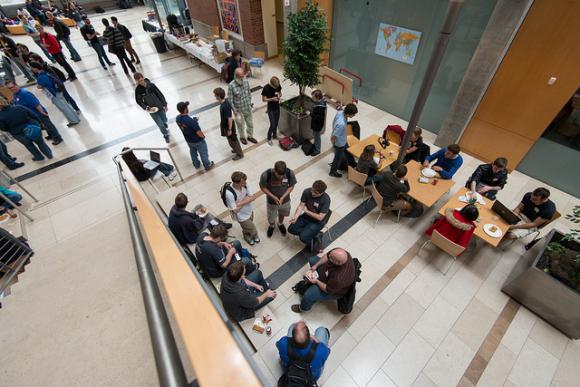 On Oct. 13, more than 150 people gathered in Kelley Engineering Center to attend the Oregon State University Open Source Lab’s Beaver BarCamp 10. Beaver BarCamp is a semiannual unconference that brings together students as well as community members to discuss technology, recreation and ideas in an interactive setting.

Beaver BarCamp 10 featured attendee-led sessions on a variety of topics and was sponsored by Mozilla, RackSpace and the Oregon State University School of Electrical Engineering and Computer Science. In addition to sessions held by students on topics ranging from whistling to virtualization to playing poker, Mozilla employees presented three sponsored sessions on Web security, writing for the Web and building open Web apps.

“All of the talks by Mozilla were really cool,” says Chance Zibolski, an Oregon State computer science student. “I really enjoyed getting to learn a lot just by seeing what other people are working on.”

The OSL’s efforts to further the collaborative nature of Beaver BarCamp was evident with the variety of students present, who came not only from Oregon State but also from Portland State University and the University of Oregon.

“I was so happy to see folks from the community, PSU, UO and OSU come together in the spirit of learning and open source,” says Mozilla employee Mike Morgan. “Sharing and collaborating should expand beyond university walls, and this was a good example of how to make it happen. It made me feel a sense of community and goodwill.”

While students enjoyed the opportunity to learn from professionals, presenters from Mozilla said they valued the experience of interacting with students at Beaver BarCamp 10.

“Beaver BarCamp is a great way to engage directly with students on a variety of interesting topics,” says Mozilla’s Director of Security Assurance Michael Coates. “Over the past two BarCamps, I've been able to host a Web application security hacking lab. I've been impressed by the interest level and enthusiasm from attendees and am looking forward to future events.”

Morgan says that the caliber of student participation in the sessions he presented on writing for the Web and building open Web apps confirmed for him that Oregon State students, both inside and outside the OSL, are highly skilled.

“Oregon State Students are amazing,” Morgan says. “Our Mozilla interns and full-time hires from Oregon State who worked at the OSL work shoulder-to-shoulder with other engineers from Massachusetts Institute of Technology, Carnegie Mellon University and Stanford. Their work at Oregon State has prepared them for the real-world problem solving that Mozilla and other companies need from them. Coming to Beaver BarCamp showed me there are many more excellent engineers at Oregon State — they had great questions, understood the technology and are already well ahead of the curve.”

Along with its characteristic variety of sessions — brewing beer, 3D printing and synthesizing sounds were just a few of the unique topics on the schedule -- Beaver BarCamp 10 offered hands-on learning opportunities. While OSL Student Developer Corbin Simpson taught attendees to whistle with a little practice, workshops on virtualization and building applications encouraged those in attendance to break out their laptops and learn by doing.

“I learned a lot about virtualization and I like that I can actually play with it,” says Brenn Kucey, a senior studying electrical engineering and computer science at Oregon State. “That’s what I like the most about it, that I was able to come in and see new areas that I can explore.”

More interactive sessions, technical lessons and innovative ideas will come to Oregon State when Beaver BarCamp returns in the spring. Students and community members are welcome to share their own knowledge and learn from others this April at Beaver BarCamp 11.