From Support to Success

When staff members at the Oregon State University Open Source Lab were working with creators of the Drupal content management system to provide free hosting services to the overloaded project in 2005, crisis hit. A server meltdown left all Drupal websites down for two days, emphasizing the project’s need for further support and motivating the community behind the open source project to donate double the amount needed to purchase a new server to be hosted at the OSL.

As soon as the lab began hosting Drupal, two student system administrators, Narayan Newton and Eric Searcy, attacked the task of expanding the project’s overloaded infrastructure, building a cluster for Drupal’s websites that could be scaled with the company’s growth. And its popularity continued to grow. While Newton and Searcy handled the infrastructure needs, Drupal contributors were able to focus on the project, resulting in its size tripling following the move to the OSL.

“Had the OSL not stepped up and offered hosting, we probably would have had to find hosting of our own and paid for it, which would have put too much financial burden on the project at the time and severely hampered the project,” says Jacob Redding, Drupal Association executive director.

Over the next two years, students headed up an overhaul of Drupal’s infrastructure, adjusting solutions to meet rising growth and making Drupal more easily available for download around the world. Newton worked to optimize the database infrastructure, while Searcy used load balancers and multiple Web nodes to create a formidable Web architecture. When Rudy Grigar arrived as a student system administrator at the lab in 2007, the crisis period had ended, but he was able to continue Newton and Searcy’s work, developing new features for Drupal and using automated tools to increase efficiency.

“It didn't sink in until a few months before graduating from OSU how big Drupal was,” Grigar says. “I had the opportunity to attend DrupalCon San Francisco and witnessed just how large and global the Drupal community had become.”

While they helped Drupal attain the stability needed to weather extreme growth successfully, Grigar says the experience of working on the project was equally valuable for the students involved.

“The industry experience is priceless,” he says. “It's an amazing thing to be responsible for successes and failures as a student with something as popular as Drupal.” 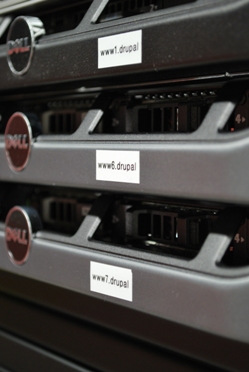 Now, Drupal has achieved both success and stability, and is one of the largest open source projects hosted by the OSL. While server overload is no longer a concern for Drupal, Redding says the association’s relationship with the OSL has continued to yield unexpected benefits, largely because of the lab’s commitment to training students through hands-on experience.

“Over the years what the OSL has provided has been over and above just fair hosting,” Redding says. “It’s been a great environment where people can come in and learn about hosting and about open source projects. Had the OSL only provided hosting we would not have been able to get such great people to work on our team.”

After working on the Drupal project at the OSL, Newton went on to work as an administrator in the Drupal Association, while Grigar spent time after graduation working on Drupal infrastructure through Tag1 Consulting and Acquia.

“Without the OSL we wouldn't have had the opportunity to learn what we did,” Grigar says. “Not only were we able to help a project like Drupal grow as college students; we developed sought-after skill sets that we've used to spread Drupal and open source software to others.”

Current student employees at the OSL continue to learn by maintaining projects like Drupal and by providing the more comprehensive support still needed by other projects that are in earlier stages of development. This service to growing projects, Redding says, is especially important within the open source community.

“The OSL has always been an essential part of any project and has fostered the success and accelerated the growth of many open source projects,” Redding says. “It’s amazing that it exists. It’s almost necessary to have a service like the OSL; it’s a very rare, very respected resource.”

Though Drupal has moved past the growing pains that brought it to the OSL, the relationship between the lab and the Drupal Association has deepened through mutual support. Dries Buytaert, the original creator and project lead for Drupal, serves on the OSL Advisory Council, and student employees gain experience by working on Drupal both at the OSL and as interns with Drupal and its partners.

And the support the OSL offered to help Drupal reach success has had positive effects for the university as well. When the lab offered Drupal as a stable option, OSU began utilizing it for university websites.

By switching to Drupal content management system and using open source tools for other needs including spam filtering and security, the university was able to save thousands of dollars initially, and continues to benefit from free and low-cost maintenance.

The fact that Drupal no longer needs the intensive support services that were necessary when the project arrived at the OSL is part of the lab’s goal to foster the success of projects that will eventually be able to support themselves. According to Lance Albertson, OSL associate director of operations, the lab’s function to drive the growth of emerging projects is perfectly illustrated in the trajectory of Drupal.

“We’ve had similar successes in the past such as our experience with Mozilla,” Albertson says. “They were in a bad position infrastructure-wise and our students at the time kicked in and helped them fix their issues. Many of those students and staff still work at Mozilla today in leading roles. Drupal is another great example of how the OSL helped a growing community expand, allowing them to focus on improving their project. Seeing the success and impact of the community around the world is the reason many of us at the lab love what we do.”

As the lab works to promote the growth of the next generation of open source projects, Redding says he’s excited to see the collaboration between Drupal and the OSL continue to expand.

“We’d love more people to get involved with our project and we’d love for them to come from OSU,” Redding says. “I think there are some really great opportunities there that you’re not going to get anywhere else. I can’t think of a single place in the world where you can get that kind of experience other than the OSL.”

To learn more about how the Open Source Lab is working to drive the growth of open source software and support the lab’s efforts, visit our Donate page.